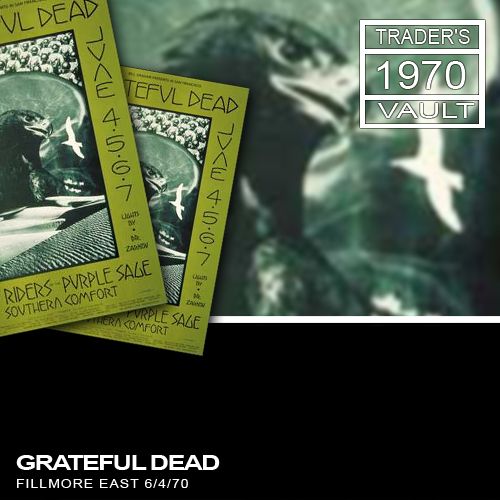 Casey Jones, Me & My Uncle, Hard To Handle, Not Fade Away-> Midnight Hour, E: It's All Over Now Baby Blue

***Audience source for both sets***

DC8Forensics was used to apply the NAB curve for normal bias cassettes. Converted to 16-bit, 44.1kHz

harmonics and used a channel blender to blend below 150 Hz to mono to minimize mic handling noise.

Notes from Gerry: "No encore that night, as "Baby Blue" calmed things down nicely and the "in for $3 Thursday night"

home audience was completely satisfied, plus the Dead still had three more nights to play that weekend...."

also, in regards to the question as to whether that was potato chips that you hear occasionally:

"My then 14 year old brother was on one side and a friend, ..., was on the other. Although my hands were otherwise

occupied, I probably snacked some too, plus my brother had a cough to boot."

Notes from Dan: This is a tape I can only call "charming." Just a totally enjoyable experience. Very nicely done, the

band is in fine form, and the tapers are having a great time. There are some cuts where the tape broke and where Gerry was

unable to get the whole song. There is also some distortion on certain songs - it's not in

the tape or the wav file, it's from the stage. There are comments from the audience and the band occasionally. It's most

noticeable during Attics of My Life, but also when Garcia hits certain notes with his vocals. I tried to minimize it but

it was too difficult to work with, so I left it as it is. I lowered coughing and potato chip bag noises when it distracted

from the music. Otherwise, I left it in. Sit back and relax, and spend an evening back in 1970. Many thanks to Gerry for

trusting me with the tapes. They were a pleasure to work with.

---Thank you Gerry Olsen for recording the show.

---Thank you miogi for your work with the acoustic sbd.

---Thank you Charlie Miller for your work on the electric sbd.

---Thank you Dan McDonald for your transfer and master of the audience.

Transferred by
Dan McDonald and dusborne

I cannot tell you how highly I prize this. I was just transfixed while listening to it.

My compliments to the taper and chefs--your efforts paid off phenomenally.

Uploaded by Matthew Vernon on February 19, 2013